The Committee meets on the 3rd Tuesday of the month to conduct the business of the Republican Party. It meets at Grand Cru Restaurant, 2600 S. Providence in Columbia at 7:10 p.m.

The Central Committee strives to bring together people who believe in personal responsibility, an efficient, limited government at all levels, and equal opportunity to succeed. Even if disagreements arise on policies, all Boone County Republicans work together to elect officeholders with whom we agree with most of the time, because our similarities are greater than our differences.

Some of the responsibilities of the Committee include:

Boone County Federated Republican Women
The Boone County Club has been one of the largest clubs in Missouri. They hold fundraisers and sponsor campaign schools for candidates and activists each year. Their largest fundraiser during the year is sponsoring Boone County’s Annual Lincoln Day Dinner. They also participate in many other activities including the Boone County Fair parade, the Pachyderm’s Annual Chili Supper, they sponsor a busy stretch of roadway for “Clean Up Columbia” and each month they donate to a local charity through their participation in the “America Cares” project. They meet on the 2nd Monday of the month at JJ’s Cafe at noon. Send an email to learn about their next meeting.

Columbia Pachyderm Club
Pachyderms is a political education club that was founded in Columbia in 1968 by the late George Parker. The club has evolved into one that is now national in scope and a source of discussion, education and political action in many cities around the country. The Columbia Pachyderms take the lead on organizing the GOP Annual Chili Supper usually held in October. Their weekly Friday meetings at noon at Dickey’s Barbecue is an opportunity to meet fellow Republicans and become informed on national, state or local issues. Meetings are free and open to the public.

Mizzou College Republicans
Members come and go, but one thing always stays the same, they are passionate Republicans. Their goal is simple, strive to spread the Conservative message throughout campus, and have fun doing it!  With over 2,000 registered members on the MU campus, they prove time and time again that they do have a voice!  They help elect conservative candidates to office, educate students on the principles of conservatism and train their members to be future leaders of the Republican Party. 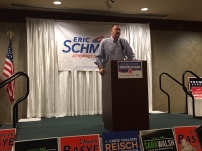